Hello people of the internet!

Since my last post, I traded in not only my cursed accord but also the family odyssey.  That's right, I'm living my best honda free life! (ok I guess not entirely true, I still have a honda mower)

Let me bring you up to speed.  In November of 2019 my wife and I started the process of getting PADI open water certified. (scuba diving)  We did our confined water training and the plan was to complete the training in the nice warm waters of the Caribbean the following spring.  Unfortunately, that didn't happen (covid) and we ended up finishing our training in the nice cold inland waters of Minnesota.  After that, I was smitten and I drug my wife along with me diving all summer.  After the first couple trips to the dive sites in our family van, I realized we couldn't keep doing that and needed something more suited to "rough road" driving.  Since we still (thought) we needed the space, the only logical thing to do was trade in my accord.  But what to buy?  We finally decided to check out Subaru, and I'm glad we did!  We found a great dealer (St. Cloud Subaru) who was totally fantastic and I got an awesome deal on a very nearly almost new 2020 Outback.  We drove the Outback to many local scuba diving locations all summer and into the fall, and affectionately named it the Scubaru. 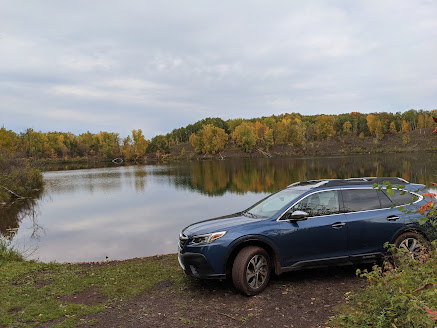 After scuba season I continued to be impressed with the Outback, especially when it started snowing.  The AWD system make a noticeable difference compared to the FWD accord (and the FWD odyssey).  During this time, we noticed the odyssey started showing its age, despite only having around 76,000 miles.  We spent numerous hours researching other vehicles and throwing out different ideas and none made sense for our family.
Sometime around February 2021 my wife noticed a small spot on the passenger seat where the leather had flaked off the seat bottom.  I also noticed a spot on the same seat near where someone's left shoulder would rest.  Since I had been through this warranty process before, I assumed this would not be covered and bought a repair kit online.  Since it was still winter here in Minnesota, I couldn't even attempt the repair until the weather started warming up.  A few weeks later (end of February-ish) I ended up bringing my car in for a recall.  While I was there, I mentioned the leather cracking to the service advisor.  They took a look and let me know they would have the service manager check it out and determine if it would be covered under warranty.  Roughly an hour later they were done with the recall work and let me know the car was done.  The service advisor also informed me the service manager had taken a look and determined the seat issue WAS covered under warranty and they had already ordered the part!  To say I was floored (based on my previous honda experience) was an understatement.
A couple days later they called to let me know the parts had arrived and I scheduled a time to bring my car in.  Even though the repair was estimated to take only 2-3 hours, the dealer hooked me up with a *free* loaner no questions asked.  I could not believe how well I was being treated and wondered why I hadn't made the switch sooner!  Since we were at the dealer, my wife and I walked around and looked at all the different Subaru models the dealer had on the lot.  My wife had wanted an Ascent, but the looks of the Forester Sport started to sway her towards the Forester.
After we got home, we started seriously discussing trading in the odyssey.  The only real problem was we felt like we were downsizing (which we were) since the van had so much room.  In the end, we decided the kids could suffer "squished" together in the backseat for the handful of times we all needed to go somewhere together.  In addition, we determined if my wife did go with the Forester Sport we could get a rooftop cargo box that would fit BOTH vehicles.  That would increase our cargo room for luggage while still leaving the rear cargo area available for travelling with pets.  My wife loved that idea and started shopping online for vehicles.
Another really long story short, we ended up getting a 2019 Forester Sport.  We added roof rails and a cargo box as planned.  Even though we were prepared with everything needed to trade in the van and drive the Forester home that day, there was a mechanical issue that needed to be resolved.  St. Cloud Subaru was again excellent to work with and treated us fairly.  They gave us a loaner car while the issues with the Forester were being resolved.  Our sales guy (Joel) called us every couple of days to let us know the progress.  When the car was ready (after a week, parts delay), Joel drove it to our house!  (Nearly an hour away) How is that for service?!?!?! 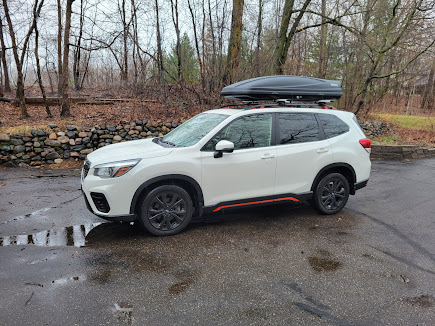 So, now we have officially finished the conversion and are no longer a honda family.  Subaru has won me over (hopefully for life). The Subaru build quality is top notch, they have put a lot of effort into the safety features and St. Cloud Subaru ROCKS for customer service.  If anyone is near St. Cloud and is in the market for a car, I would highly recommend St. Cloud Subaru.  If you do go in, let them know I sent you.